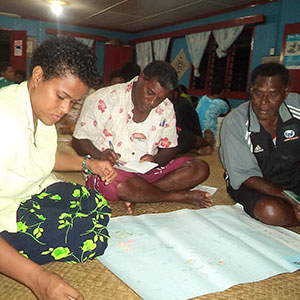 Mamanuca Sea Turtle Conservation Project has resumed with the start of the phase two of the project activities.

Community consultation was started at Yanuya village on the 14th to the 16th of April and the 30th of April to the 2nd of May in Tavua. This meeting with the community is very important in the start of the phase two as the results of phase one will be reviewed before it is implemented.

During the consultation meeting, a special program was also prepared targeting the children of Yanuya and Tavua.

The idea is to promote turtle awareness at grassroots level. Educational activities were part of the children’s program which will help them in their understanding about the project.
Children are the best influencers in trying to bring about change because they take action right away compared to adults. Namamanuca Primary School headmaster Kitione Turagabeci said at a school awareness program on turtle conservation that children would spread the word once they learn something exciting.

“Kids are more aware of the turtle conservation since they practice what they learn compared to adults. Students are always excited listening to awareness programme and they will talk about what they learn to their parents,” said Mr Turagabeci.

The 40 school students who attended the program were also found to be very knowledgeable on the issue due to the continuing visits by the Mamanuca Environment Society (MES).
However, according to the socio-economic survey conducted on the island only 30 per cent of adults were aware of the Turtle Moratorium passed by the government. But with their traditional knowledge the villagers assisted in plotting out nesting sites of turtles on the island.

The Mamanuca Sea Turtle Conservation Project began its first phase of awareness and socio-economic survey at the beginning of this month on the island of Yanuya.

The 7-member team worked with Roko Tui Malolo, Ratu Jerry Naisusu from the Provincial Office who assisted the team by sharing ancestral knowledge on nesting sites of turtles.

Household baseline survey was also part of the activity during the consultation trip to the 2 villages. The main aim of having this survey is to gain knowledge and information on the individual household, Turtle consumption, traditional knowledge and other general areas where Turtle information could be extracted.

Areas that needs more review is the renewing of maps created during the first phase on which nesting and feedings sites are re- confirmed. As in the Mamanuca region, this is an area common with uninhabited islands with beautiful white sandy beaches and undisturbed coastal vegetation. This is an area that is common with Sea Turtles whenever going out on a trip on an outboard engine boat or even going out for fishing.

As a result of the interview done to both the villages, it is proved that the area is still a common nesting area and as well as a common foraging grounds in the Mamanucas. For Tavua village, most of the interviewees mentioned that they’ve started to experience a lot of Turtles feeding and wading around the village foreshore. Out on the reef edge, it is always occupied by huge Turtles who lie underneath the coral reefs.

A group of island floating far north of Yanuya and Tavua is called Narokorokoyawa which consist of Kadomo, Navanualevu, Navadra and Ori. Other islands mentioned are Monuriki and Monu which are known by the village elders as the sites where turtles nest and feed. There are always vacant beaches around Tavua Island, Yanuya and Tokoriki which is believed also to be the nesting sites.

One of the positive feedbacks gained from this consultation process is that the communities visited are aware of the turtle moratorium that is currently enforced by the Department of Fisheries until 2018. Yanuya village had already experienced dealing with cases of illegal Turtle harvesting

Consultation will also be conducted in the two villages of Yaro and Solevu in Malolo.