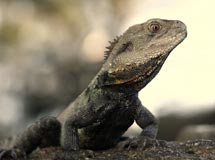 The WWF say: The islands of Fiji provide one of the world’s most outstanding tropical marine environments, attracting growing numbers of tourists and marine resource users from around the world every year. Fiji comprises of around 844 highlands, cays and islets, occupying an area of around 1.3 million sq. km. The extent and remoteness of its shallow tropical marine habitats, from oceanic reefs to near-shore fringing reefs, mangrove forests, sea grass beds, lagoons, estuaries and deep oceanic drop-offs, make it an area of high marine biodiversity, with many species unique to Fiji. Fiji is also home to the Great Sea Reef, the third longest barrier reef in the world.

A Wealth of Marine Life

It is estimated that there are around 1,000 coral reefs in Fiji, covering 10,000 sq. km-representing around 3-4 per cent of the world’s coral reefs. Encompassed within this vibrant ecological framework are nearly 400 known species of coral, more than 1,200 varieties of fish and a multitude of invertebrates. Fiji is also home to some unique marine and coastal species such as the endangered Humphead wrasse (Chelinus undulates) (also known as Maori or Napoleon wrasse), now protected under CITES Appendix 1.

Fiji’s warm waters are also important migratory routes for 12 species of cetacean. Four of these species, the blue whale, sei whale, humpback whale and sperm whale are considered to be endangered or vulnerable. In 2003, the Fiji government offered protection to these species by declaring Fiji’s territorial waters as a whale sanctuary.

Nature at the Centre of Fiji’s Way of Life

Fijians have important traditional relationships with the sea, reflected in their lifestyles, customs, traditional knowledge and history. Around 80 per cent of the population live on the coast and rely heavily on marine resources for food, livelihoods and cash income. Marine resources are also used for minerals, pharmaceuticals, construction material and a vast range of useful products. The major sources of economic growth and livelihood are fisheries, the third largest export industry accounting for 1.5 per cent of GDP, and the tourism sector, which accounts for 17 per cent of the GDP.