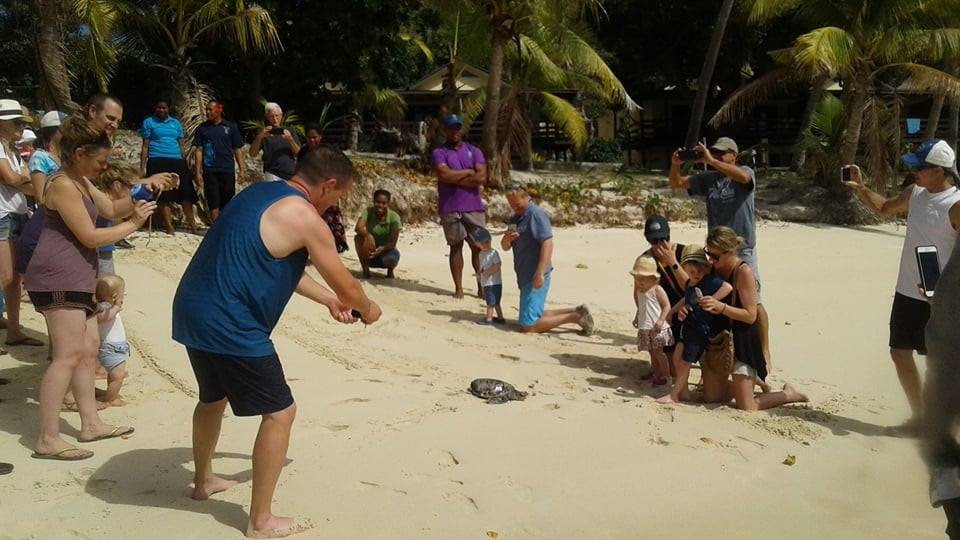 Sea turtles are “ambassadors of the oceans”, for conserving these animals’ means protecting the seas and coastal areas, which in turn means protecting a complex, interconnected world on which human societies depend.” People all over the world have heard about the plight of sea turtles in the media as their populations have been dramatically reduced worldwide, earning them Critically Endangered status on the IUCN Red List . Sea turtles have existed in our oceans for more than 100 million years, but today they find themselves struggling for their lives and their future.

The Mamanuca Islands are one of the major nesting and foraging ground for Green and Hawksbill turtle and were once exploited for traditional use in the Mamanuca Group. The UNDP Small grant programme awareness, the significance of sea turtles, their status in the world and the legislation that protect them are shared with the identified stakeholders, the villages, schools and resorts.

Through the Mamanuca Sea Turtle Conservation Project supported by the United Nations Development Programme (UNDP) and funded by the Global Environment Facility (GEF) Small Grants Programme (SGP), the Mamanuca Environment Society (MES) is working to protect the remaining turtle population in the Mamanuca and Malolo Islands.

Some family members of the Survivor Entertainment Group (SEG), Mana Island Resort and Spa resort staff and MES staff farewell a two year old Hawksbill turtle. The group assisted  Mrs Barbara Probst release Little “Survivor” by signing the farewell song Isa Lei” who was a resident turtle at the Turtle Rehabilitation Centre  and was looked after by Mana staff and Mamanuca Environment Society for two long years. Little Survivor was allowed to crawl on the beach to the water edge and dived into the ocean without turning back.
“It was very emotional to let go of Little “Survivor” said Mrs Probst. She was one of the survivors from Sunset Beach, a common nesting ground for sea turtles during the nesting season at Mana Island in 2015.

MES Project Manager, Marica Vakacola said the Mana turtle rehabilitation program allowed the turtles of different ages with various health complications to recover through close monitoring, once fully recovered they are tagged, trained before they are released back in the wild. “This is part of the Turtle Exemption given to the resort by the Ministry of Fisheries due to numerous nesting on the day. The head start program has created a lot of awareness on both local and visitors alike on the importance of protecting endangered species in Fiji added Mrs Vakacola.

The name “Survivor” was embraced from the Survivor Entertainment Group who is filming the movie Survivor in various islands in the Mamanucas and are currently based out of Mana Island. “Thank You for the amazing programme added Mrs Probst”.

MES will continue to work with conservation partners, member resorts, schools and communities in leading the work of turtle conservation to maintain the protection of these critically endangered sea turtle population.