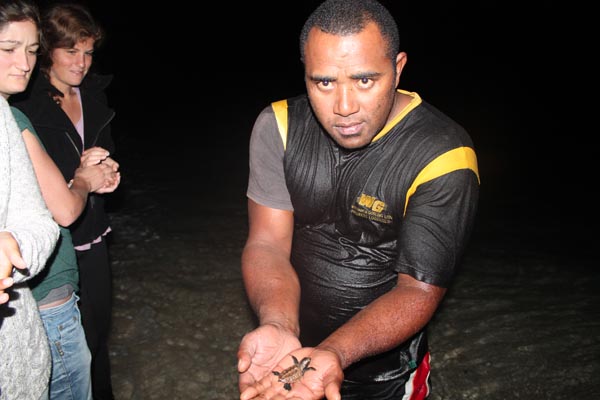 It was late Wednesday night, 14th of December 2016; a female Green Sea Turtle Species tirelessly crawled up the beach at South Sea Island to lay approximately 150 eggs. The sighting was reported by one of the island staff. According to Sunia Nakanokia, the turtle nested right next to the staff quarters building and 5.3meters away from the high tide mark.

South Sea Island is famously known as a hotspot for day trippers which are serviced by South Sea Cruise. Given the fact that South Sea Island is always a buzz with water sports activities, sea turtles still manage to return to lay egg along the beach. This has been a clear indication that the staff and the management are following the best practices for sea turtle during nesting season.

“It was an amazing thing to see a living creature giving birth to a new life. I must say that I can count myself lucky to have witness such an amazing thing which most people do not really have the chance to see with their own eyes”, said Mosese.

Most of the staff that were based at the Island at that time were excited about the nesting and was still optimistic about more turtle nesting sightings in the near future at the Island. MES Field Technical Officer, Kolinio Mataiyaga attended to the call for the monitoring of the nest and confirms the nesting area. Turtle sighting information was gathered from staffs and also they were informed on the possible hatching dates.

“It was an amazing sight, seeing this wonderful creature  making their way into the ocean which they call home without knowing what the future holds for them. “ My only wish that they all  of them reach the adult stage so that they can keep coming back to South Sea to lay eggs and also to give a chance for more staff and guest to witness such a memorable event,”, said Sunia.

Later in the month, another clutch of baby turtle emerged from the sand, east ward side of the island and made its way to the ocean. This was captured by many staff and was a surprise to many as this nest was unknown. No one knew when the nester came and laid these eggs. There were guests and staff who witnessed the event and were mesmerized by the sight of the baby hatchling finding its way out of the nesting pit and crawling straight into the ocean.

In the Pacific, sea turtle symbolizes humbleness, good luck, and longevity. It is also associated with the pacific culture and is used as totem to some coastal villages in the Mamanuca region. MES would like to thank the South Sea Island staff and management for great effort in maintaining the island that is attracting potential female nesters to keep returning and to lay eggs along the beautiful clean beach of Vunavadra Island.