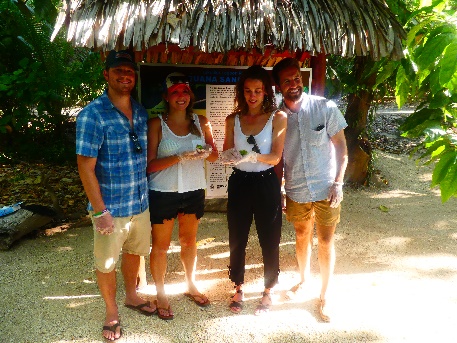 Likuliku Lagoon Resort iguana captive breeding program started in 2010 after the discovery of a Fiji crested iguana by a resort staff. It was once thought to have extinct from Malolo for more than 25 years. Today, iguanas are found in several forest pockets within Malolo Levu including Likuliku Lagoon Resort ridge areas. The resort is fully engaged in a dry forest restoration over the past months to support the existing population of this critiacally endangered iguana species.

The resort with the MES commemorated World Threatened Species Day with World Tree Day and focused on planting dry forest plants which are food to the iguanas. Also, part of the activity for the day was the release of three iguanas back into the wild after spending months of monitoring in the sanctuary.

The much-anticipated activity that drew much attention was the release of the crested iguanas back into their natural habitat. The last iguana release was in August of last year, where three juveniles were released on Malolo island.

Ahura Group Environment Manager, Sialisi Rasalato facilitated in this part of the program and introduced the three iguanas to the guests. With much excitement guests came flocking to have a feel of the iguanas.

“We would capture new wild iguanas and if it were an adult, we would release it the next day after tagging, DNA tissues collected and measurements taken,” said Mr Rasalato

“The wild ones that we keep temporarily in the sanctuary are baby or juvenile iguanas that hatched out in the wild; they are usually too tiny to be tagged, or sex determined and can also be too weak. We keep them for several months until we’re able to tag it, collect DNA tissue, do the measurements and then release them at the same location where we found them,” he added

“It’s the first time for me to see and hold a crested iguana and I love its bright green color,” said eleven-year-old, Sally from Australia. Many adults and inquisitive kids enjoyed the program and were thrilled to see and learn more about these iguanas.

The decline in the iguana population has been attributed to the destruction of their natural forest habitat by either human activities or the introduction of non-native animals including rats, cats, mongoose and goats which either eat the iguanas or their food. The resort is putting in endless effort in restoring the dry forest restoration program.

“Forest fire is one of the biggest challenge to reforestation program.  The Vanua Lawa  fully support the dry forest conservation initiative and this year the Tui Lawa has endorsed a monetary penalty with the assistance of the Nadroga Province for anyone engaged in any form of forest fire,” said Marica Vakacola, MES Project Manager

“Our biodiversity is declining and we are losing out on the services provided by our ecosystems. This is a threatening issue as it will affect our future generations. However, if we were to implement simple activities like these daily, weekly or like us monthly; you know activities like planting a tree or setting up coral nursery; we can make a real difference”.