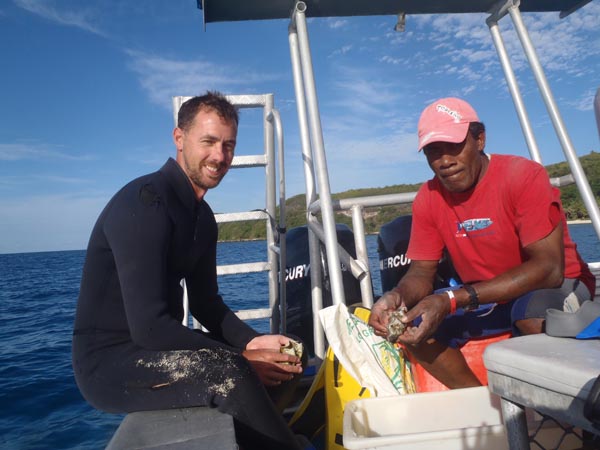 A fresh batch of 310 young Giant Clams made a long journey of about 160 miles from Makogai Island Marine Research Station in the north eastern side of Viti Levu down to three resorts in the Mamanuca Island last week.

The move was made possible through the partnership of the Ministry of Fisheries and the Mamanuca Environment Society with Tokoriki Island Resort, Mana Island Resort and Matamanoa Island Resort.

At Port Denarau, the baby Giant Clams with an average length of 10 centimeters was divided into three containers before boarding a speed boat for a one and half hour ride to Matamanoa Island resort where the transfer boat to Tokoriki and Mana was waiting.

MES’s Giant Clam Regeneration Project was initiated in 2005 but at Tokoriki Island Resort, it started way back in 2000 by Dive Tropex in conjunction with the Ministry of Fisheries.

In fact, the Tokoriki Giant Clam Regeneration Project was the first project in the West of Fiji to plant Giant Clams.

Among dive heads, Tokoriki is famous for this unique diving spot.

It was around 4pm when the MES team reached Tokoriki and was greeted by Will and Alex Garland —the owners of Dive Tropex Tokoriki.

We were taken straight to the Giant Clam Project site, nicknamed Magic Mushroom in a small platform reef about100m offshore.

At the dive site, the clams are measured and catalogued than placed in a sack and carried down to the cages where they were painstakingly but successfully laid to rest – alive of course in catalogued order.

The small clams, which are four to six centimetres long, are planted in one to five metres deep waters as they need a rocky base and a lot of sunlight to grow.

The bigger ones are planted in deeper waters measuring eight metres in depth at least.

Once planted the cages are closed and wired down. The cage offer protection to Clams, particularly the small ones from snails, rays, octopus, crabs, flatworms and fish.

The project, according to Alex was a success but it comes with tonnes of hard work and sacrifice.

“Plenty of preparation is necessary before the arrival of a batch of Clams.  Firstly rigid mesh cages need to be built to place the Clams in for their first year of life and sacks of small dead coral rubble are collected to forms the base of the cage.

“A vital component is the location of a suitable site in which to place the Giant Clams.  In 2000, Aisake Batibasaga with his team from the Ministry of Fisheries test dived various sites around Tokoriki Island they choose the current site because it got a little bit of current and some wild Squamosa Clam

“I can’t remember the exact amount of clam we started with but I think we have planted about 800 baby clams at various stages throughout the decade.”

Alex said they started the project with no marine science training, but with a passion for the environment and they have learned a lot through the years.

He said Giant clams are one of the most ecologically important organisms in a coral reef, known as a keystone species.

Like hard corals, Giant clams use symbiotic zooanthallae algae to produce a shell that adds to the reef structure. In addition to this, they clean nutrients from the water that could otherwise go towards the growth of macroalgae, smothering and killing corals.

A single Giant clam can filter 100s of liters of water in a single day, and only where there are giant clams do we see high coral abundance and biodiversity around our island.

“To cut a long story short over 10 years on we now have over 100 Clams of various species. What we have learned is that you might have to put them where it’s not necessary suitable for your snorkelers but it’s going to be good for the clam.

“You need to accept that you going to lose come clams even if you put them in cages about -10 to 12per cent survival rate. Anyone who is interested in planting clams should also think of the bad weather when choosing a location. There’s no point in putting them where it’s really nice in a calm day.

“I think it’s also better to get bigger clams. The second batch which was about 10 to 15 centimeters got good survival rate and don’t just get 20 because none will survive. Put them in the right place not in a place that it’s good for tourists and try to get a bigger one- don’t put them in sandy area, they don’t need sand and also accept that you going to lose some. The good thing is that once they reach 30 centimeters, they can survive.”

Alex who have lived and worked in the Mamanuca Region for more than 10 years said they have lost only one giant clam last month-the first in more than six years.

“It is sad because two years ago it was around 45kilogram and we just don’t know what happened. We had some stolen in the early years by the boys in the village but now they are proud of it. It seems that the Tridacna gigas is the strongest and it is our most treasured possessions”

Alex said because of the five different kind clams they have nurtured over the years, Magic Mushrooms is now a prized snorkeling site as giant clams serves as nurseries for a host of fish and invertebrate species.

“We don’t use much fuel because it is not far away like many others and it’s a site you probably won’t see anywhere else. It’s a positive in every way,” he adds.

Mamanuca Environment Society Project Manager Betani Salusalu said research into the reproduction culture of giant clams has become an important module in the process of repopulating depleted coral reefs around the globe.

“Farming giant clams is a slow process that takes several years. It takes 3-10 years for giant clams to mature from larvae into a clam large enough to be safe on the reef. The project was exceptionally successful.

“It has met its objectives and developed institutions and local capacities to sustain and expand project results. The large number of volunteers indicates that this project is perceived as an attractive initiative which provides sense of ownership, achievement, opportunities for development,” said Mr Salusalu. 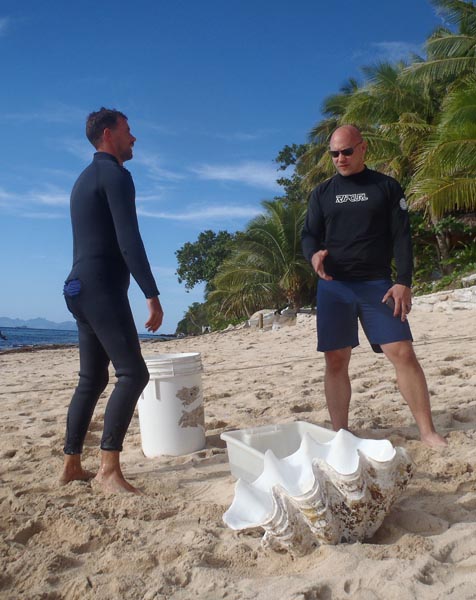